The Prelinger Archives house what some have called “the first 35 mm film ever that has come to light.” Cable Car Ride on Market Street, 1905-1906, Before and After Earth Quake shows what San Francisco, California looked like while Dr. Harvey Wiley was preparing to enforce the Pure Food and Drug Act that President Theodore Roosevelt signed into law on June 30, 1906. Notice the variety of transportation in use. Cable cars and new fangled automobiles zip by, but so do horses and bicycles, and pedestrians who seem to have no fear of darting between moving vehicles with reckless abandon. No road rules, no worries.

This upload by Ron Wininger featuring a fitting soundtrack is my favorite version to watch:

Interestingly enough, back on the East Coast, Wiley was only the third person to own and drive an automobile in Washington, D.C. a few years later. “This car had the distinction of being the victim of the first automobile accident in the city of Washington,” wrote Wiley in his autobiography. 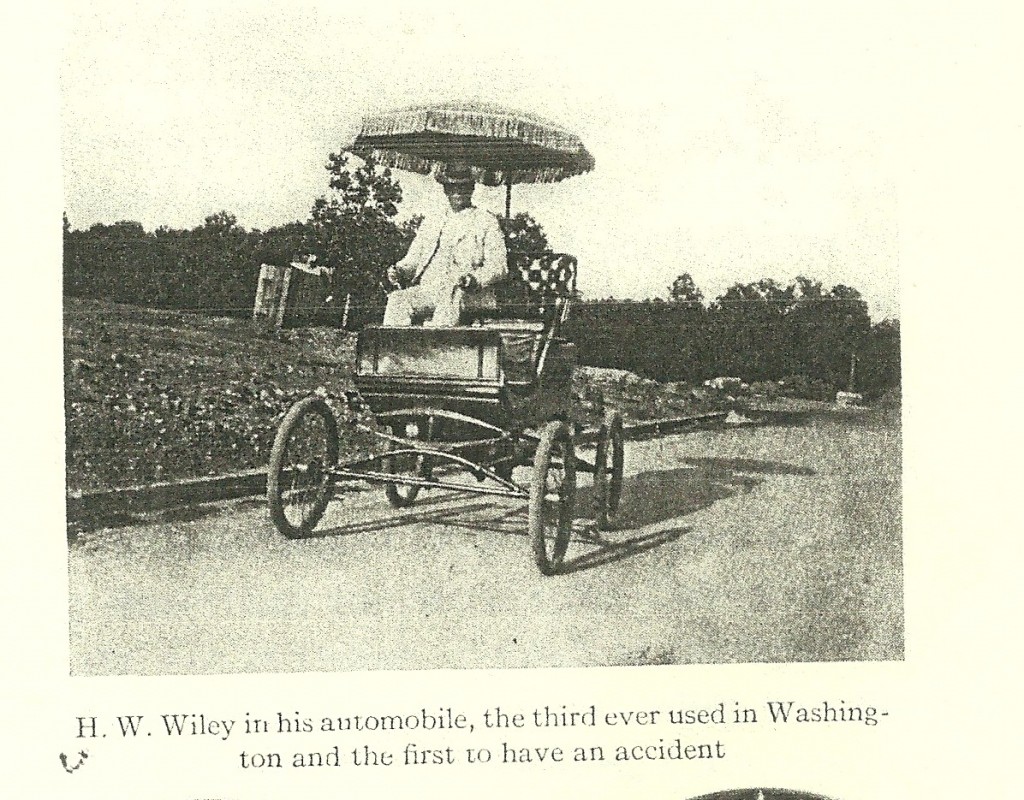 “I had started to cross Pennsylvania Avenue at Thirteenth Street, when I stopped to allow a street-car to go by. Coming down the Avenue from the east was a delivery wagon, the driver of which was looking back, talking with someone behind him, and did not see me there in my automobile. He was driving along with great speed and struck me amidships. Before he stopped his horses the wagon-tongue had passed between my right arm and my body, fortunately not seriously injuring either, but bruising both to some extent. But the car was fairly well demolished. He was the first ‘hit and run’ driver in Washington. He backed his horses away and never said: ‘I am sorry,’ ‘Are you hurt?’ or ‘Good-by,’ but drove away at the same furious speed. All the papers in the city the next morning had head-lines and articles about the accident. One of the articles described me as trying to climb a horse.”

The San Francisco imagery in the aforementioned footage makes this scene quite imaginable!

It was at that time when Wiley, ever the renaissance man, wrote a poem about his appreciation for automobiles:

OH, HOW I LONG FOR THE SCENT OF THE GASOLINE AT THE FRONT DOOR

O talk not to me of the strident musk

With the scent that never dies;

And tell me not of the odors, at dusk,

Which from new-mown fields arise.

I have found an aroma far more divine

Than all in the world, I ween;

And one for which I shall always pine,

I love, for aye, the whiz of the wheels

And the whir of the dashing car;

My postulant heart in its pulses feels

The joy of the jolt and jar.

I love the honk of the chauffeur’s horn,

It is music to my soul.

And the dash up the road at early morn,

With a breakfast as its goal.

The odors that rise with the morning sun

From the roses so rarely seen,

Are sweet, but of joys there is only one;

‘Tis the scent of the gasoline.

I have heard the praises of attar rose,

Of the perfume of Eau de Cologne;

Of the breeze which from redolent Cathay blows,

Of the spices of fragrant Ceylon.

But the sweetest of all, I can truly say,

(Can you doubt, after this, what I mean?)

Is the fragrance which follows the horseless shay,

The Glory of Gasoline.

CategoriesGlimpses of Wiley's World Wiley: A Man of Letters